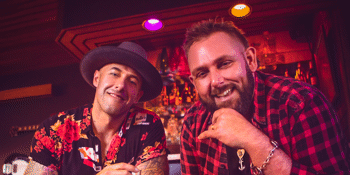 The Wolfe Brothers - Startin' Something Tour

The Wolfe Brothers are heading into 2022 on a high and full of optimism after almost 2 years away from doing what they love most about being musicians – playing their songs live for the fans.

The popular duo has earned themselves a solid reputation for their catchy singles and dynamic live shows. They constantly push the envelope with their songwriting, and delight fans with their honest approach. Now, the band are gearing up to tour and promote the release of their fifth studio album – their first international release through music juggernaut BBR / BMG – and it is a party from start to finish.

When the global pandemic swept across the world, it changed all the band’s plans and extended the timeframe to deliver their new record. “The pandemic completely changed the trajectory of this album and for the better,” says Nick Wolfe. “The line-up of songs changed dramatically; songs that would not have even existed had it not been for lockdown were created. The traditional process got thrown out the window as songs got written in online co-writes with writers around the world, parts were recorded remotely, and files sent around and pieced together. What you hear in the final product is a mix of it all. Some of it was recorded in the studio traditionally, some of it in bedrooms and even wardrobes! When you can’t get to a studio a wardrobe can make a great DIY vocal booth!”

The release of their fifth studio album Kids On Cassette on 30th July 2021 has definitely struck a chord with music fans around Australia, and now the 12-track release has garnered the duo an incredible seven nominations in the 2022 Golden Guitar awards.

All of the singles from the album – No Brakes, Anybody Ever, Startin’ Something and Kids On Cassette – have earned acclaim from fans and critics alike. After achieving 16 consecutive #1 singles in their career it is no wonder that The Wolfe Brothers were one of the top played artists on Australian Country Radio in 2021, a pretty impressive title to have.

Now, there are even more reasons to celebrate with seven nominations in the Golden Guitar awards. This brings the boys nomination tally up to 24. They celebrated with a big win at the 2019 awards, taking home four Golden Guitars. For 2022 Australian Country Music Awards, the duo’s album Kids On Cassette has earned them Golden Guitar nominations in Toyota Album of The Year and Contemporary Country Album of The Year, the title track also snagged a nod for AMCOS Song of The Year and CMT Video of The Year. Other tracks from the release also shined, such as the collaboration with LOCASH which earned them a nomination for Vocal Collaboration of The Year. In addition, Small Town Song, which was co-written with Andrew Farriss has been nominated for Heritage Song Of The Year. The Wolfe Brothers have also been nominated for Country Music Capital News Group or Duo of the Year.