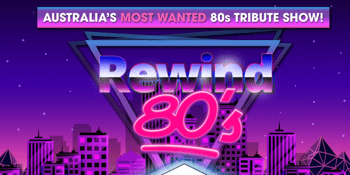 Commercial Hotel - South Morang (South Morang, VIC)
Saturday, 16 October 2021 8:00 PM
28 days away
18 Plus
POP
Rock
Send this event to
With their retro hits, cherry lips and high kicks, Rewind 80s take to the stage performing tunes from one of music's most iconic eras, the sensational 'eighties'.
This six piece live band with over 6,000 followers on Facebook, plays homage to the rock, pop and new romantic bands that had you screaming in front of a television set as you watched the likes of Molly Meldrum & Countdown as a kid.
This is a show not to be missed with its high fashion 80’s glamour, head flicks and synthesizer's. These kids aren't the new wigs on the block! They have been spinning around like a record and are renowned as Australia's most wanted Eighties Tribute performers.
They've lived the 80s, spent their pocket money on vinyl records, been to Brash's music stores, listened to 3XY and seen Wham live, and they've lived to tell the tale!
This is the true story about the best musicians that money can buy, who have spent hours practising their craft because they just can’t get enough of the 80s... Get your party started with Rewind 80’s !!